Back to Technical Learning Library

The Advantages of Decontaminating with Vapor Phase Hydrogen Peroxide

The Advantages of Decontaminating with Vapor Phase Hydrogen Peroxide used in processes where traces of toxic substances are unacceptable.

Hydrogen peroxide vapor at low concentrations is an effective decontaminant against a wide variety of microorganisms. Not only is it capable of permeating most materials, VHP can kill microorganisms residing in seams and joints. Permeation by a vapor allows effective penetration into these areas. Vapor hydrogen peroxide can also penetrate plastic membranes.

Most polymers & adhesives being used to manufacture devices cannot tolerate high temperatures without suffering deleterious effects. Sterilization with hydrogen peroxide vapor can be accomplished efficiently at temperatures as low as 4°C (39°F). Using these low temperatures during processing lessens the chances of damage to the materials which could comprise the load being sterilized.

A pressure vessel is not required with VHP; therefore, lower investment is required. In addition, because of increased efficacy of peroxide vapor, there is low chemical consumption per cycle.

VHP processing extends the service life of enclosures (as compared to other sterilant systems) by virtue of the low temperature, the low concentrations of peroxide vapor used, and minimal pressure differences.

The VHP process poses little danger to the operator when properly controlled. The natural degradation products of hydrogen peroxide are water and oxygen. Because the sterilant is decomposed in the VHP process, there is no concern about disposing of toxic chemicals following processing. 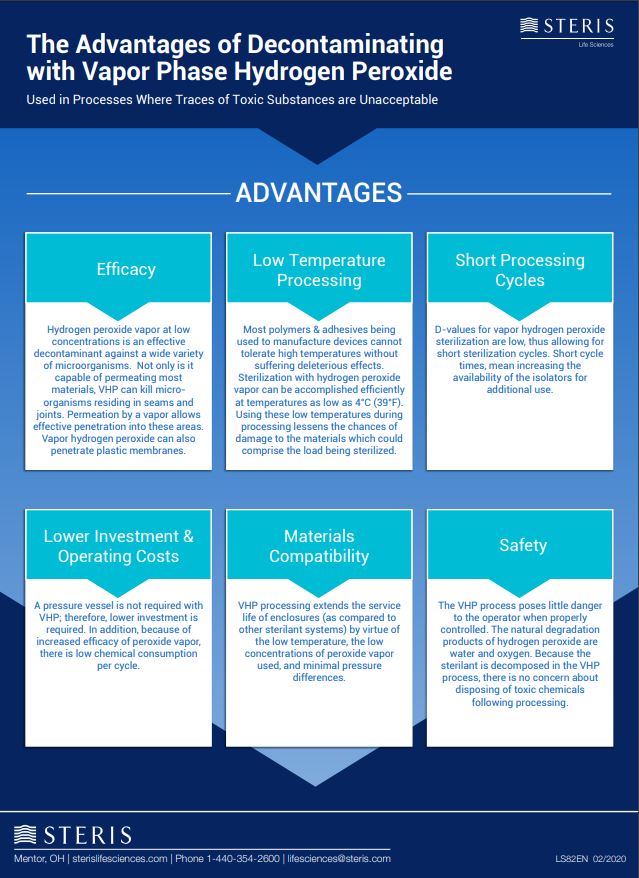